In 1998 after the film Dangerous Beauty came out, both Tara Prescott and Jwlhyfer de Winter developed an interest in the real Italian Courtesans of the 16th Century. Jwlhyfer wanted to put together a group to attend local Renaissance Faires in character with historically accurate costumes and personas. Tara also dreamed of attending Rennaissance Faires adorned in Venetian garb, with a character to match.

Tara and Jwlhyfer met at the 2003 PEERS Dangerous Beauty Ball and found that they had a common desire to research and faithfully reproduce the costumes and personalities of a courtesan. They decided to combine their efforts and create theatre.

Over the years the group’s vision expanded to include historically- and fantasy-based performances at a number of venues. Our current portrayals include the courtesans of Renaissance Venice as Bella Donna Venetian Courtesans; the legendary 18th century New Orleans house of ill repute — populated with French & Creole tarts, dancing girls, pirates, gamblers, fops, and the like — as the House of the Rising Sun; and fantasy princesses, princes — and evil queens!

All of these portrayals include historical singing and dance of the period, meet and greet, and staged shows, all in brilliant costumes and witty characters to match.

Jwlhyfer de Winter majored in Performance Art at the San Francisco Art Institute. She wrote, directed and performed in Theosomorphia, Danse Vampyresque, Wolfbone, Winter’s Dream of White Roses, and sang inDweller at the Gates of Silent Memory among other pieces. She was a “special type” film extra for two years in Hollywood, California and worked in approximately 15 films and three music videos. She is the co-founder and former President and Vice President of the Greater Bay Area Costumer’s Guild. She has been singing since she was six, and has sung English Renaissance and British Isles Folk Music for many years.

Tara Prescott worked as a professional actress in over 40 theater productions in England and the U.S.A. She studied theater at Arizona State University State University, Bobby Ball Academy, and completed a one-year full-time acting program at the Drama Studio of London. She has performed in a wide range of plays, including Julius Caesar (London fringe theater), Veronica’s Room and Laundry and Bourbon (San Jose Stage Company), Company, Godspell, and Election Day. A founding member of Touche swordfighting academy (fightmasters: J.R. Beardsley and Richard Lane), Tara is certified in stage combat at the advanced level (“recommended”) through the American Society of Fight Directors and the British Society of Fight Directors. She sings, dances, and is currently learning to play the Lute.

About the Courtesans of Venice: 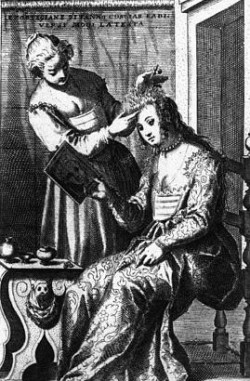 Venice, a shining jewel of the Renaissance, perched on the water like a dream that thrust itself into the waking imaginations of all those who inhabited her vulnerable beauty…

While Queen Elizabeth reigned in England during the latter part of the 16th century, fortunate Venetians of the noble class reveled in the glorious architecture of their watery city, and filled their homes and palaces with the finest works of art. They clothed themselves in silks arriving from the silk road trade route, dined on the bounty of the sea and enjoyed the attentions of a unique and talented group of women known as courtesans. A woman who occupied the profession of “La Cortigiana Oneste,” or “Honored Courtesan” was not to be confused with an ordinary prostitute. The ability to bring pleasure to her patrons was only one of her many skills, perhaps less important than her wit, charm, intelligence, high level of education, knowledge of politics, fashion sense, beauty, and, of course, her mastery of the realm of imagination.

To capture the attentions of a wealthy patron, she needed to cultivate an aura that would encourage him to consider her his equal, and therefore be deemed worthy to occupy the role of his most compelling love object. She achieved this goal through her many virtues. In exchange, the courtesan enjoyed far greater power, freedom and knowledge than the typical Venetian wife.

The wives of Venice were married based on the size of their dowries and for the alliances their marriages could create between families. Their husbands enjoyed full and exclusive rights to all money, goods and property brought to

the union. As she was valued primarily for her dowry and her ability to bear children, the Venetian wife was minimally educated, and expected to focus her mind on religious texts.

In contrast, the courtesan was frequently proficient in several languages, was well versed in classical and contemporary literature, could engage in political discussions, and held an honored position in high-level functions of the day. She was usually an accomplished singer, dancer and musician as well. Remarkably, she was allowed to collect and keep her own earnings, and to own property. As a result, the best courtesans were able to accumulate great wealth, often exhibited in their sumptuous attire, rendering them virtually indistinguishable from the noble women of the city.

Though a courtesan’s fortunes were tied to the attentions of her noble patrons, she certainly experienced far greater freedom than most women of the 16th century. Perhaps acting with the same wisdom as the powerful and revered Venetian courtesans, the great Queen Elizabeth staunchly refused to take a husband during her rein, thereby retaining the more powerful position of an unattached woman who enjoys the right to bestow her favor as she sees fit.