Our members include accomplished harpers and recorder players, as well as talented singers. We often perform with the New Queens Ha’Penny Consort, a 16th century musical ensemble.

We can perform lively and graceful historical dances, from 16th century court and folk dances, to 18th century minuets and country dances, to Victorian waltzes and polkas. We can also teach simple dances to your guests, allowing them to join in the fun. 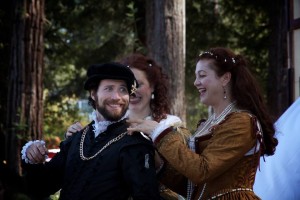 In character with audience interactivity.

While we can portray characters from any historical era (or fantasy!), from upper class to lower, we currently specialize in the following personas:

Our original, handmade costumes (made by Bella Donna members) are accurate reproductions of historical clothing. They have won numerous awards, including: